MP4 is one of the most popular digital multimedia file formats used to store audio, video, subtitle and still images. It is used in various devices like camcorders, Smartphone, Tablets, laptops, etc. The file extension of MP4 file is .mp4. It supports Windows and Mac based operating system. Though, MP4 is a commonly preferred video file format as it offers high quality video, audio but in some cases, it denies to play. After facing such difficult issue, you tries it with different media player on Mac but it does not play. These situations arise due to corruption of MP4 file.

Are you facing MP4 file corruption issue? If yes, then make the use of Fix MOV application. This tool has been designed and developed with an advanced repair algorithm that enables it to repair damaged or corrupted MP4 file on Mac. The most important things about this program is, it is read only utility means it does not modify the original file instance of modifying damaged MP4 file it simply create a new health MP4 file and extract the information from the old file and put in new one. Before talking about the MP4 file repair procedure and features of this program let us talk about some most reasons which lead to MP4 file corruption and make it unplayable on Mac.

Most frequent reason behind MP4 file corruption or damaging:


Whatever can be a reason behind MP4 file corruption or damaging, Fix MOV utility can easily repair MP4 file Mac without any difficulty and make them playable. It is capable to fix MP4 file which can be corrupt, damaged or inaccessible on Mac. This advanced tool allows you to fix password protected MOV without any difficulty. For more information about password protected MOV follow this link. By using Fix MOV program, you can repair MP4 file Mac on various versions, including Snow Leopard, Lion, Mavericks, Mountain Lion, Leopard and Yosemite. After repairing MP4 file, it also allows you to take the preview of repaired MP4 file before saving it to the destination. With the help of this utility not only MP4 file but also you can repair MOV file easily. It also enables you to fix out of sync audio in MP4 video files.

How to Fix a Corrupted MP4 Video File on Mac?

Step 1: Download and install Fix MOV tool. Once you launch the software, the main window is displayed. After that, you need to browse and select your damaged MP4 file using “OPEN” button. As soon as you select the file, you have to click on the “REPAIR” button in order to fix corrupted MP4 video file. 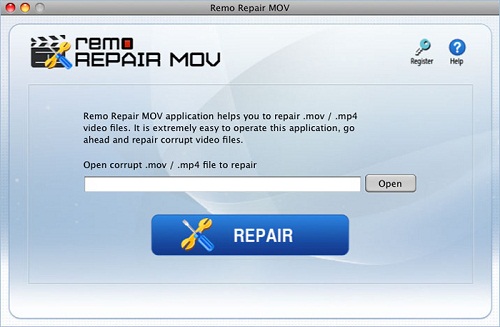 Step 2: As soon as the reparing process is complete, you will be able to preview your entire repaired file by using “Preview” option.